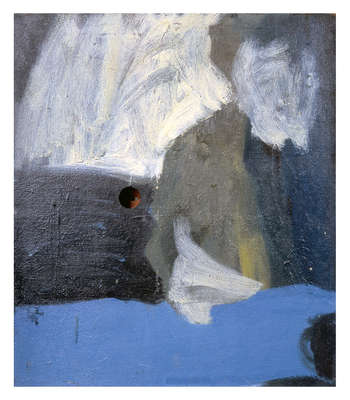 In this work Norman White reacted to his earlier debate with abstract expressive painting.

Bellevue seems like a typical oil painting that may be attributed to the trend of Art Informel durig the 1950s; in fact, it does represent a re-used, earlier work by White. But the panel picture suddenly changes into an object when a circular hole slightly to the left of centre, which was hardly noticeable before, opens noisily and an eye slowly appears behind it. This eye looks out from the painting, gazing back and forth before it disappears once again. The process is repeated at random intervals. The mechanical aesthetics of the automaton, which this work has in common with Departure, and the unexpectedly appearing figurative element rob the panel picture of the aesthetics that it had reclaimed from abstract expressionist painting.

The oil painting is reduced to a framework for the active eye; the specific form of the painting is no longer of any interest. As in Departure, in Bellevue White also uses the content to refer to a longstanding Christian iconographic tradition – that is, to the representation of the eye of God, which is seldom as realistic, however, and certainly does not appear as a moving form within the image. This adaptation also develops its ironic content primarily when carried over to the art cited, which experiences a very literal apotheosis but operates in a way that is contrary to the picture’s content. The eye appears in an indefinable space behind the flat carrier … Its obviously machanical, automatic and noisy appearance immediately revokes any kind of metaphysical association or meditative reception.