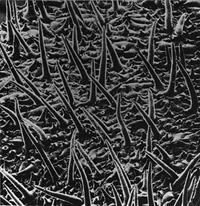 -An assumption of biology such as "Programmed Language" that is mightily projected into the future dragging on the past, and space and time and results of Cosmology in which there is the destiny of mankind too: this is a room and a meaning of "Biology and Destiny".

-The structure of genetic code deriving from Cybernetic and Bionic experiments; "Feeling" Biology according to a new conception and historicity stimulates the psyche of modern man: these are moments of a multiform theory that I have already opened for years by "Biology Cyborg".

-With films such as "Cybernetics of Vegetable World" (16mm, black and white in colours, with sound-electronic effects) I tried to extort, by the objective, hidden and glamorous aspects from a nature jealous of her secrets (Milan Art Center - Milano - April 13th to 16th 1976). The world of Botany, the phenomena of growth of threes, their sensibility and movement, their Bio-mechanical behaviour have been filmed by very mobile experimental shootings, sometimes dramatic, in which the image of a nature still entirely to be discovered is vivified and articulated by a bionic operation of electro-mechanical apparatus and trials etc. Trees, cells, micro-organism played an inedited and new role: protagonist of a universe escaping from us, and of phenomena of a "Biologic life" that we have not still learned to realize.....

-In the short review I presented in suitable freezing:

-In the same occasion, (see photo), various alive animals have been shown in suitable experimental containers such as special cavies, ducks, geese, tortoises, etc. etc. variably alternated - they link obviously to an endless experimental theory on the mystery and poetry of biologic life.