It is a workshop of non-conventional and innovative mapping for the construction of a psycho-geographic atlas of the city and of the global metro-political relations of Florence. 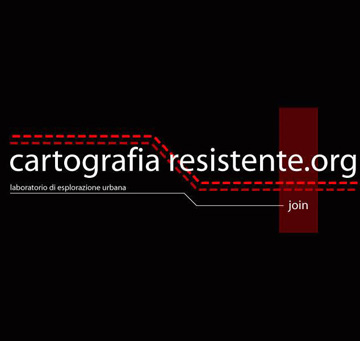 The Cartografia Resistente project was born in 2004 in Florence as a "laboratory of urban exploration" aimed at the construction of an alternative atlas of the city. The fields of research of the collective are public space and urban environment.

Analyzing and exploring the urban configuration of Florence with a perspective form below, self-managed and open-source, the collective plans to develop new ways to describe aconstantly evolving urban landscape and to provide a wide public with the necessary instruments for the construction of the atlas.

For this reason the workshop has developed a website for the collaborative mapping and has started practices of urban drifts aimed at the exploration of Florence’s outskirt. The Cartografia Resistente’s group is heterogeneous and informal. It is made of people that share a critic perspective on the transformations of the city. The members had previously been involved in experiences of space conflicts, such as occupations of disused buildings and creation of temporary autonomous zones. Their incursions intend to explore the different aspects of the metropolitan condition of Florence. The confrontation of diverse experiences can favor the development of new practices and approaches for the description of the city and for the political resistance against dominant processes.

The laboratory has activated several collaborations and compared its methods and works with other similar artistic ventures. The collective has also organized several video, live set and content-jaying events about different urban contexts. They were displayed at the Elettro+, a youth center created after an occupation organized to demand spaces for art and expression. Successively, Cartografia Resistente left that venue and preferred an independent and nomad location.

The collective get its inspiration from important themes: active sociality, the creation of a shared urban memory, and the creation of a collaborative and interactive cartography, and the resistance against politics that hinder the development of the territory. The workshop wants to be a nomadic transversal city experience open to activities of collective management and social critic. Its strength consists in addressing city planners or geographers: Cartografia Resistente plans to involve a wide number of active subjects in a process of cognition, description and action on the urban context of Florence, "with the concrete aim of visualizing and criticizing power relations that are often concealed and that control and transform the urban space"[1].

Cartografia Resistente’s approach to the themes and conflicts of the urban environment can be defined “psychogeographic”. The collective, in fact, combines a technological approach, mediated through the use of digital technologies, with the concrete experience of the territory, that is to say the direct contact withplaces. Far from being incompatible, those two operative modes are part of the essence and life of the collective since the very beginning. "On one side we can find a “situationist” vision, influenced by the will to get lost in the city, the flanèrie, the need to find non-Cartesian ways of landscape representation. While, on the other side, there is a more political and analytical outlook that, providing practical information and fostering ways of resisting hegemonic processes, tries to deepen the criticism about speculative processes, situations of repression and the transformations of the city."[1]

The purpose of the collective is to explore the urban landscape mapping its hidden or neglected aspects and to represent the city’s phenomena in an innovative way, experimenting new modalities for the production of psycho-geographic experiences. Thanks to the collective management, Cartografia Resistente aims at the "production of different and antagonistic views of a city that is caught in the trap of a globalized capitalistic economy and that is preyed by the needs of tourism or of the economic valorization of the cultural and historical heritage". [1]

This project derives from the fights for the liberation of city spaces and the consequent creation of autonomous spaces with a collective management. "A background of shared interest toward alternative geographies fostered the exploration of self-managed representation of urban landscape - seen as physical, social and mental landscape – coming from below. This project is resistant because it plans to fight against the dominant processes of transformation of the territory that are strongly controlled by the logic of profit. It is resistant because it wants to provide citizens with instruments for the self-organization of territorial processes. Finally it is resistant because, notwithstanding the fragility of digital memories that can be deleted or damaged, nothing can last longer thana memory based on shared practices and on the reticular participation of a multitude of subjects that are actively involved in the its formation."[1]

Almost six years after the experience of Triangolazione, the group has decided to pass through the territory toward the Plane of Florence, to rediscover those places and to go back on the considerations about that strategic part of the metropolitan area that is undergoing a heavy transformation.

This project was carried out by drawing on the map of Florence a triangle that joins three constitutive points of the expanding area of the city: the Ex-Fiat, Ikea and the jail of Sollicciano. It took four days to cover the itinerary and the people who took part to the journey shoot photos, filmed, recorded sounds and wrote notes. All this material was then assembled in a coral narration made of on-line texts and photos.