The Multimedia Production Section is an organ of the Centro Multimediale del Conservatorio di Firenze (Multimedia Center of the Conservatory L. Cherubini in Florence) and is dedicated to the production and diffusion of interactive technological music and visual art works. The authors and composers come from two courses of the Department of Music and New Technologies of the Conservatory: the course of Electroacoustic Music Composition and the course of Multimedia Composition and Art Installation. 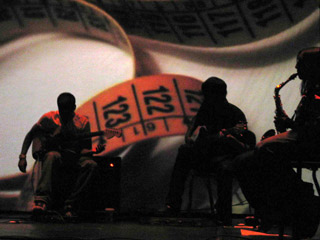 In addition to the design of multimedia productions, the main aims of the Multimedia Production Section are: the composition of electroacoustic music and original multimedia works and the production of interactive multimedia installations that employ special technologies able to detect ambient information and to intervene on different aspects of the work of art. Besides, the Multimedia Production Section collaborates with regional, national and international agencies and institutions to promote the diffusion of contemporary art and realize opportunities of encounter with the public.

The Production Section of the Centro Multimediale del Conservatorio di Firenze (Multimedia Center of the Conservatory of Florence) started its activity in 2009. With Prof. Alfonso Belfiore as coordinator, the section developed around the course of Composition and Multimedia Composition of the Department of Music and New Technologies (MNT) that he directed.

The creation of a multimedia center with a section dedicated to the production and promotion of works of contemporary music and art, derives from the will of the direction to institutionalize the value of the wide production of the MNT and to create new spaces, resources and opportunities for students that would like to work with contemporary music.

The Multimedia Production Section has been able to support and promote the realization of contemporary art works that range from electroacoustic music pieces to audio-visual works, from interactive multimedia installations to live electronics. Many of these works have been selected and performed during important events of contemporary music and art, such as SEAMUS conference (Society of Electroacustic Music United States), ICMC (international computer music conference), NYCEMF (New York City Electroacoustic Music Festival), having the possibility to reach an international public from the US to Canada and Mexico, from UK to Greece, Slovenia and even Australia.

Abstract: the spatialization as a prerogative of the composition process, the acusmatic approach realized in the Faculty of Music of the University of Montréal by the research group in Spatial Immersion, directed by Robert Normandeau.

Projects to be realized

Events and other activities: