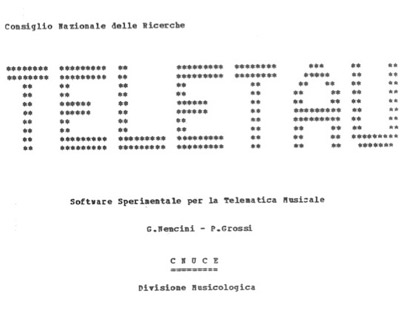 TELETAU is a software packet for music informatics. It was active in the virtual machines CHERU@IFIIDG and MUSIC3@ICNUCEVM of the CNUNE, installed on the ICNUCEVM knot of the EARN-BITNET network. For knot it is meant a hardware device (today called server) able to communicate with other devices of the same network, and in 1968 the network to which the Pisa’s knot/device was connectedwas the EARN-BITNET.

Bitnet (Because it’s time to Network) is a network for academic purposes created in the 80’s.It provides electronic mails and distributes information and files. The EARN (European Academic and Research Network) is similar to the BITNET but it is a European network that uses an IBM gateway (web device).

Therefore the software packet TELETAU, was installed on a device of the CNR of Pisa and connected to the EARN-BITNET network, so that users located in different places, but connected to the same network, could use it.

TELETAU can be considered the evolution of the TAUMUS-TAU2 system, because it disposes of its music library and its software for automatic generation, transformation, elaboration and analyses of the pieces.

The TAUMUS-TAU2 packet is the outcome of the work of the Reparto d’informatica musicale of Pisa in collaboration with Conservatorio L. Cherubini of Florence. This system made possible the creation and management of a big archive of music pieces that could be performed, analysed, encoded and elaborated.

The evolution that we find in the software packet TELETAU consists in the possibility of working in a free-running environment where any user connected to the network, following a specific procedure, could send commands in the form of files; TELETAU receives the information through the network connection, executes them on its device and sends the results to the remote user.

There were already examples of connection and external management of the TAUMUS-TAU2 through a telephone connection (SIP) and the connection of a device I/O (video terminal) that send the commands to the system TAUMUS-TAU2 at distance (ex. Realization, through radio connection RAI Pisa – Florence, of two days of permanent auditions, with meetings and round tables, in occasion of the 41th Maggio Musicale Fiorentino).

But those first attempts were examples of connections “from pint to point”, that is, apre-arranged connection between two single points through a rented network, while, with thedevelopment and the activation of the software packet TELETAU, it became possible for multiple users to use the system and its archive (TAUMUS-TAU2), stored in the CNR of Pisa, at any time, turning it into a network service.