Yellowcake
Yellowcake is the name of the solo project of the musician Spartaco Cortesi that delineates his path in the second half on the 90’s, collaborating with the multimedia artist Federico Bucalossi. The pseudonym Yellowcake is a technical jargon that refers to Uraninite, a yellowish mineral from which uranium is extracted: «this meaning collocates the world in a different context that is far from the culinary world and potentially dangerous». 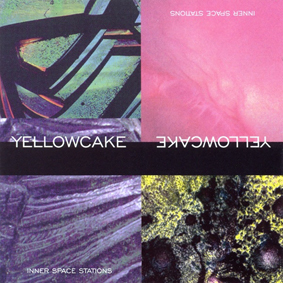 The electro music project Yellowcake took shape in 1996 with the release of the debut album Inner Space Stations for the Belgian record label KK Records that signed the products licence (in the sub-label Radical Ambient) together with the Wide Records from Pisa. Immediately after the album’s launch the live activity started with a performance realized with Federico Bucalossi and based on the use of the video-feedback (inspired to the Dream Machine by Brion Gysin and William Burroughs), a rudimental analogical system which guarantees a wide margin of improvisation and experimentation. “The critique of images is the defence of imagination”, a sentence extracted from the recording of a conference by Hakim Bey, opens the second album Hard Trax in 1998 for KK Records. Live exhibitions continue in a path that touches the realities and subcultures characteristic of that time, (from the industrial areas of Northern Europe disused and occupied as clubs) until 1999, the year of the project’s break up. During their last concerts the image of the two performers dissolves and melts with the lights that are projected on the screen placed in-between them and the public.

Encompassing the philosophy of the “do it yourself”, inherited by the experience of the contro-culture, Spartaco Cortesi creates electronic weavings that become dub pieces, downtempo and tecno, filtered by a sensitivity closer to kraut-rock and the industrial music of the origins than to the club-culture of that period. The main points of reference of its work are probably the literary texts of J.C. Ballard, that seem to anticipate and mirror the social and environmental transformations of those years and the following ones. Yellowcake tries to start a process attempting to take the gaze away from the external world in favour of introspection and exploration of the interior space.