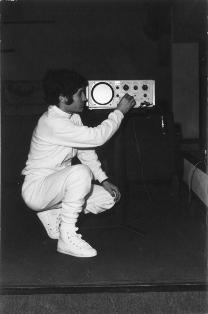 Giovanni Valentini next to a radar and other subsidiary electronic machines. According to the Doppler effect radar uses continuous waves and registers through images and sounds the presence and the movement of bodies in space. (san Fedele art gallery, 1971)

In the early sixties and even before, Giovanni Valentini had been working on a machine which used electronic and electromechanical vibrations, for biotechnology.

In that period Valentini, in collaboration with the engineer Dore Benelli (son of the famous poet, writer and playwright SEM BENELLI, author of the famous play "La Cena delle Beffe") and other technicians, had been working on a grate vibrating footboard, as modular prototype of a vibrating floor.

In 1966 Valentini invited his friend Gianni Colombo to try this special machine and he cried: "How beautiful!!", exclamation said by one of the four founder member of kinetic art, surprised by a prototype going beyond the same kinetic art and every visual experiment: it was a different experience.

The exclamation of Gianni Colombo made Valentini happy: it was the feedback from one of the few artists of those years to understand the different (Rizzato - Whithwort - Diagramma Art Gallery of Milan, held by Luciano Inga Pin)

Even the same Roberto Sanesi, poet and historian, was shocked and silent after that experiment and Bruno Munari too was very surprised. There it started the path which led Valentini to operate as a surgeon-student, directly in biology and in human body.

The process was anything but casual, it excluded any previous visual art form to enter a new terrain, different from genetic engineering, from nascent bionics and from robotized body.

Engineer Dore Benelli and other technicians assisted Valentini again. This second modular machine keep on being built and again Valentini’s friend Gianni Colombo was one of the first trying it with extremely positive judgements. The machine was finally presented at Valentini’s studio in 1967/68.

Valentini requested and gained the collaboration of some doctors, biologists, engineers of University of Pavia

That humble and solitary path led him to innovative proceedings of suspended animation, presented in 1971 at the personal exhibition - San Fedele Prize at the San Fedele Art Gallery and Apollinaire Art Gallery in Milan.

The complex subject of suspended animation was widely treated, with human tissues, little animals, etc., put into nitrogen freezers at a temperature of -270 (°C). The whole thing was hoped to be the first step for the future suspended animation of man.

The same Giulio Carlo Argan was really interested and surprised about this matter.

It is useless to say that if suspended animation hasn't been realized in the following decades, it is due to different causes.

One of them is that it is needed a high techno-science, from which we are far today. Another cause is that complex techno and socio-human structures are needed, which probably are ripening in a century or more. These structures are necessary in order to completely realize the complex researches between international universities and research institutes.

International peace, even if partial, is desirable because it would improve research among different sectors of Art-Science and it would encourage international research.