MediARTech
Multimedia technologies for cultural heritage and contemporary art. The 450 signatories (museums, research centres, enterprises) of the "Memorandum of Understanding on Multimedia Access to Cultural Heritage of Europe" meet to discuss the achieved results and to plan policies and programs. MediARTech is also Exhibitions, Festivals, Workshops and International Events. 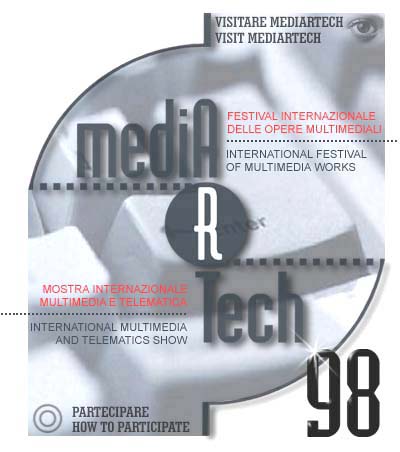 With the support of the European Commission DG III, DGX e DGXIII.

MediARTech was born to explore the frontiers of advanced multimedia researches, applications and technologies, both on-line and off-line. The event took place at the Fortezza da Basso of Florence, from the 23rd to the 28th of March 1998. It included exhibitions, debates, conferences and workshops divided in subject areas (Education and Cutlural Heritage Areas) .
The event presented the new instruments for cultural heritage diagnostic, conservation, restoration and enjoyment, as well as the new means for expression in the world of contemporary arts. The event was supported by the 450 signatories (museums, research centres, enterprises) of the "Memorandum of Understanding on Multimedia Access to Cultural Heritage of Europe", which met to discuss the achieved results and to plan policies and programs. In the Exhibitions section, the exposition of Virtuality& Interactivity, edited by Franz Fischnaller, allowed the visitors to browse, interact and experiment multimedia art and the virtual applications of national and international artists and researchers. The most prestigious European art collections virtually gathered at MediaARTech, thanks to the display “Museums of Europe”.
The Youth Space represented an important moment of exchange and encouraged young authors to propose and show their recent works. Another relevant presence was the exhibition Future TV, with Interactive TV, VoD-Video on demand, HDTV. [Here] it is possible to find the complete program of the events and shows that took place during MediARTech.

Other artists and works:

Events and Other Activities:

Towering Inferno - Kaddish, show - Teatro Comunale–Multimediality in a big concert with 15 musicians and singers, three maxi screens, special effects. A denounce and a prey for the holocaust. The future of arts and of the coexistence of differences.