Web City
It is the Internet Party, the Italian event of the international Internet Fiesta, organized in Florence from the 21st to 30th of March 2002 by ArtPort. It was an important international show dedicated to web culture. It included videos, refreshment stands, interactive games points, workstations and maxi screens connected to the web. 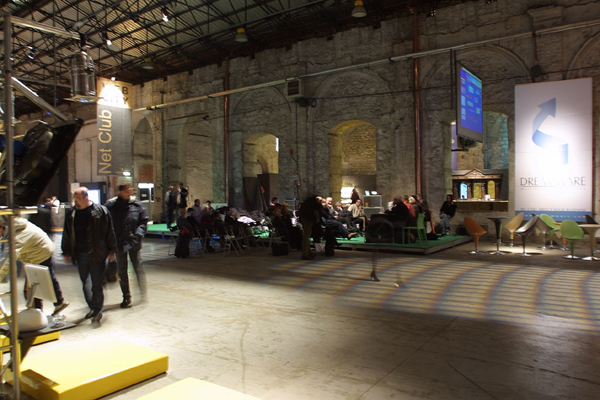 Web City was born with the intention of experimenting the future through the contemporary city and Internet.
By now web culture – the organizers state –affects all the aspects of contemporary life. Ad even the recent crisis was useful to the web, obliging the whole system to preserve and support the most dynamic elements. Metropolitan spaces and the web are witnessing the flourishing of “future factories” where professions such as architect, designer, stylist, performer blend and create new artistic forms characterized by “contaminated” competences, new ways of production and communication. [1] Among the purposes of Web City there is the will to present, in a spectacular and strongly communicative way, the companies and institutions that consider innovation their main strength and that work for culture and communication.
The event proposed two complementary actions which represented the most interesting points of view on the changes that are taking place in the contemporary city: CULTURE MARKETand NETCLUB (sound and visual space that hosted new artistic productions diffused through the web).
Web City also proposed a virtual journey through the “urban places” of contemporary culture. Among them there were Ars Aevi, the contemporary cultural centre realized by Renzo Piano, the CccB in Barcelona, the Quartier Museum in Wien, the Zkm in Karlsruhe, the Palais de Tokyo in Paris and an excursus on major European capitals’ marketing and territorial promotion.
There were also round tables and international speeches tackling the issue of the role the web plays in the cultural field (March 22, Web and the ,23 Tuscan territorial politics in the Internet era, 27 «From the telegraph to the web» with the participation of Eletta Marconi) together with a great number of dj, vj and performances such as the Sugarbabe’s one (March 27). The Bolognese stylist presented the collection «Proleterk», inspired to the new metropolitan proletariat.
It is important to remember the exhibition «Time to consider» which displayed the winner works of the international contest Artist Poster, inspired by the Twin Towers terroristic attack.
Besides, Web City offered an occasion to party, thanks to the twinning with la Fête de l’internet in Bruxelles and the Internet Fiesta' that was promoted by the UE and celebrated in the same days in the biggest cities of the world.

Events and Other Activities:

- the exhibition Arts Respond to 11 September: a display of the winner works of the international contest organized by the city of New York as a response to the tragic events of September.
- Twin Towers of Light, the lighting engineering installation that replaced the Twin Towers in Ground Zero with two powerful light streams. The project was presented in the «Culture Market» section.